I often get the question: “What’s so special about thermometers and do I really need one?”

The answer is “YES”

Unless you’re a professional chef, or have been cooking for a long time, you can’t trust your ‘gut’ feel.

You need the right tool.

There are lots of great thermometers out there to choose from.

I’ve personally bought a lot of them over the years.

And, I’ve learned the hard way, with thermometers, you get what you pay for.

I’ve selected several  to show you so you can better understand your choices.

I encourage you to watch this video. It goes over the basics of food safety based on temperature:

For the Big Green Egg,  and the other Kamado cookers, the best thermometers are the ones where you stick a probe into the meat and run the attached cord out to an external thermometer.

That’s because you’re cooking the meat with the dome down. You don’t want to keep opening the dome to check the temperature with a handheld thermometer because the Egg temp drops each time you do that.

Today, a lot of these thermometers can communicate with your smart phone. That way you don’t have to stick close to your cooker to make sure you’re not over cooking the meat.

Here are a few thermometers that should raise your temperature 🙂

This one, called the iGrill 2

This is a mini-version of the iGrill2 called the iGrill Mini. It has 1 probe instead of 2, but it’s also bluetooth enabled:

Here’s a thermometer called Maverick that can keep track of up to 4 probes at the same time! I’ve personally never thought, “Gosh, I need a few more probes for this cook.” But, if you ever do, this just might fit the bill.

Here’s the iDevices Kitchen Thermometer that is Bluetooth enabled: 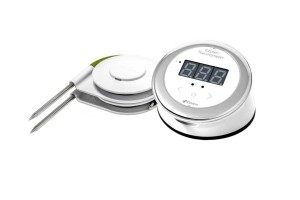 And, here are a couple of remote thermometers that don’t have a wireless feature. But, they are very accurate and very versatile.

The first one is more for the home chef. It’s called the ChefAlarm from Thermoworks. Having some nice features, I use this one a lot.

This one is targeted at the professional chef and the competition bbq chef. It’s called ThermaQ from Thermoworks. But, if you like accuracy and versatility, it could be the right one for you:

And here is one more I have to include in any discussion about thermometers.

This one is not a remote thermometer—instead it’s handheld.  Its claim to fame is that when you stick the probe in the meat, you get the temperature reading in about 2 seconds! And, it’s extremely accurate.

It’s also from Thermoworks and called the Thermapen.

I use it when I’m cooking steaks and chicken…steaks because I don’t want to overcook them and chicken because it has reach a minimum temperature to be safe to eat.

Now, if the Thermapen, at around $100, is more than you’d like to spend, here’s a new similar thermometer from the same company called the Thermopop. It’s only a little slower and a little less accurate, but it’s a solid choice for the price.

I hope this gives you a better understanding about why thermometers are a necessary tool for your Big Green Egg grilling along with some ideas for equipping your own kitchen.

Let me know if you have favorite.

You have Successfully Subscribed!

We will not share your email address with anyone else!
×
Push the Limits of Your Big Green Egg
I'm constantly experimenting on my egg.  Join my list to hear about my latest recipes, tips and tools!