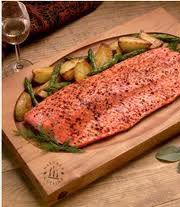 When I take a bite of  perfectly smoked salmon and close my eyes, I imagine I’m in the Northwest near a river where the salmon run.

The flavor of the wood smoke along with other flavors like lemon and dill make a sweet combo that tastes just right to me.

For cooking Salmon, I personally use an alder wood plank like the one from Nature’s Cuisine out of British Columbia.

The nice thing about this plank is that it’s reusable many, many times. I’ve used mine for several years and except for some charring, it still works great.

If you use this plank, you MUST  cook indirect over an inverted plate setter rather than directly over the coals.

Since I’m using the alder wood plank I don’t add more smoking wood directly on the coals. I don’t want to overpower the taste of the salmon. 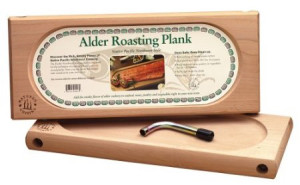 If you do want to use an alder plank directly over the coals, then you need one like this: 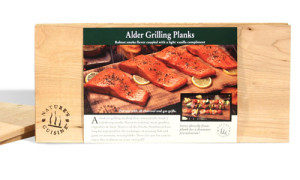 This video gives you the basics.

As with any food you cook on the Big Green Egg like fish or chicken which are normally cooked between 300º and 400º, you can either cook them direct or indirect depending on the recipe and your preference.

You have Successfully Subscribed!

We will not share your email address with anyone else!
×
Push the Limits of Your Big Green Egg
I'm constantly experimenting on my egg.  Join my list to hear about my latest recipes, tips and tools!